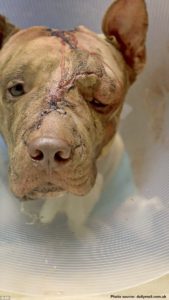 Ollie was the victim of Brendan Evans, who stabbed the innocent dog over 50 times, of which 16 were deep stab wounds, before stuffing him into a suitcase and casting him into a vacant lot, where he was discovered by a passerby only because his foot was sticking out. Veterinarians did everything they could, and after surviving the surgery to repair the horrific wounds, they thought Ollie would make it, but sadly, the friendly dog succumbed to his horrific wounds two days later on October 12.

After investigations led police to Brendan Evans, police searched his apartment on November 14 and found two cat paws and several mutilated rats in the freezer, some with severed heads, legs and tails. They also found knives covered with dried blood, including an 18-inch machete.

Brendan Evans was arrested on November 15 after police linked his fingerprints to the burglary of a home on August 23, and animal cruelty charges were added November 22 after police matched his DNA to the same suitcase Ollie had been stuffed in. At the time Brendan Evans was on probation for a 2015 bank robbery outside Tampa when he was arrested on the animal cruelty and burglary charges. 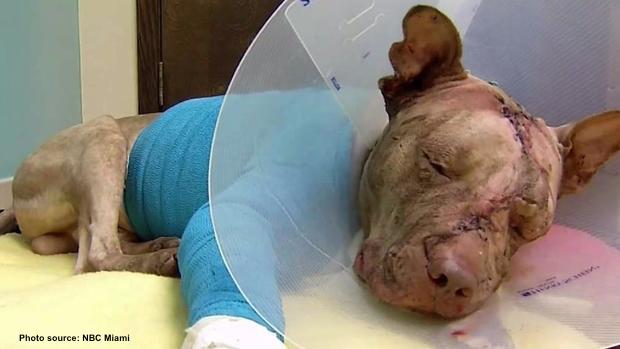 Brendan Evan’s defense is that it is within his religious right to torture and kill animals for his voodoo practices. We disagree, No animal should endure the torture and pain that Ollie did, which, in addition to being stabbed, his fur was in Evan’s oven and one of his teeth in Evan’s wallet.

Because Brendan Evans can be classified as a habitual violent felony offender, it doubles the penalty on the animal cruelty charges from five years to 10 years.

For Ollie, justice needs to be served. Brendan Evans mutilated Ollie and caused the dog unimaginable pain and suffering. Evans has 17 charges of animal cruelty against him — 16 for the deep stab wounds and one for trapping Ollie in the suitcase, and he needs to be needs to be sentenced to the maximum of all 170 years.

Please be a voice for Ollie, whose voice was brutally silenced by Brendan Evans.

This petition is now closed.